Here’s What Steve Reeves Told A Newspaper Reporter How He Ate After His 1947 Mr. America Win

Home  /  Uncategorized   /   Here’s What Steve Reeves Told A Newspaper Reporter How He Ate After His 1947 Mr. America Win 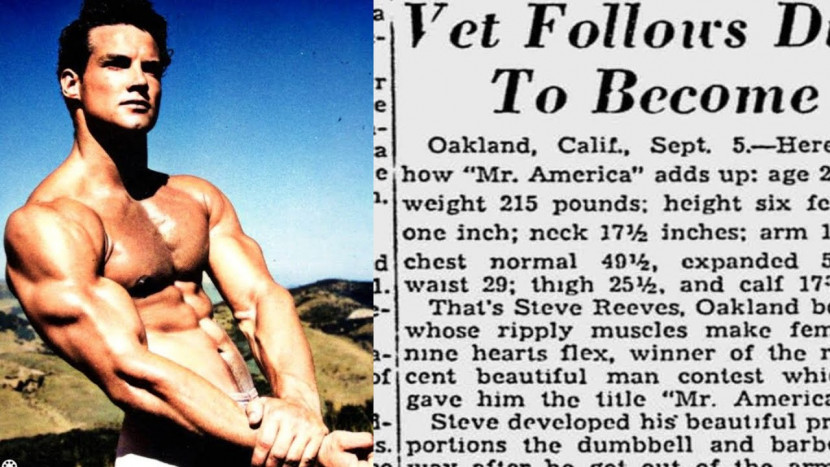 Buy me a protein drink at https://buymeacoffee.com/SteveReeves and get exclusive Steve Reeves material and bonus commentary!

Here’s What Steve Reeves Told A Newspaper Reporter How He Ate After His 1947 Mr. America Win

WHO WAS STEVE REEVES?
Mr. America, Mr. World, Mr. Universe
Bodybuilder, Actor, Rancher
The first award-winning bodybuilder turned action movie hero. Steve was cast as “Hercules” in 1957. He was paid
just $10,000 for the role. The movie went on to make millions and Steve became the #1 movie star in the world in the late
1950’s. He made additional movies – “Hercules Unchained”, “The White Warrior”, “The Avenger”, “A Long Ride From Hell”, “Morgan The Pirate” and more.

Scott is a father of 4, published author, speaker, over 75 Bodybuilding and Fitness DVDs, fitness business owner. 35 years in the fitness industry as a bodybuilding competitor, strength coach for high school and college athletes. Works in the Cedar Park, and Austin, Texas area.

These videos are for informational purposes only and are not meant as medical advice, nor is it a substitute for medical advice or a medical program.

The workouts and exercises demonstrated here are designed to be used by healthy individuals only and may be too strenuous for some de-conditioned people.

Viewers should not perform any of the workouts or exercises shown on this channel until they have been shown the proper technique by a qualified fitness professional.

Anyone experiencing any pain, discomfort, lightheadedness, dizziness, or becoming short of breath, should stop exercising immediately and consult a doctor/physician.

Scott York, Scott York Fitness nor any person associated or shown on this channel is responsible in any manner for any injury, loss, risk, or liability, personal or otherwise, that might result from the use of the fitness programs or exercises shown on this youtube channel.