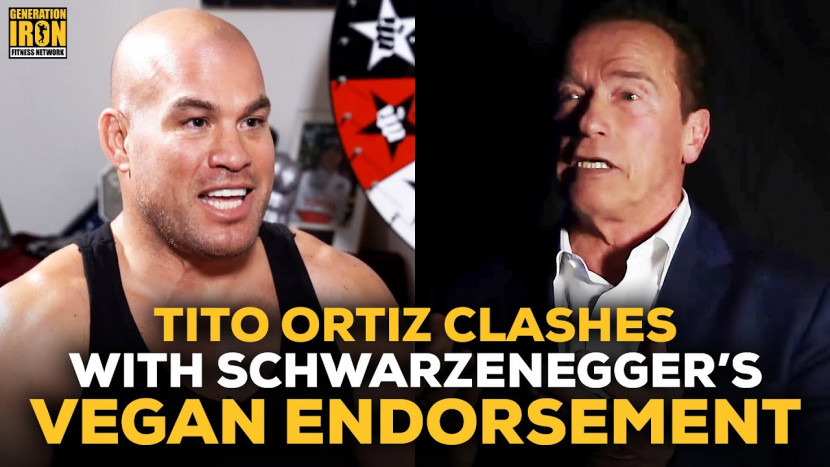 Tito Ortiz fully disagrees with Arnold Schwarzenegger’s endorsement of being a vegan athlete.

Last year a documentary called The Game Changers was released. The film’s mission statement was to open the audience’s eyes to the dangers of eating meat. Arnold Schwarzenegger appeared in the film and was heavily featured in the movie’s marketing. He claimed that he now endorses the vegan diet – and urges any athletes, including bodybuilders, to stop eating meat. But can a bodybuilder or a combat sports fighter succeed on the same level without eating meat? In our latest GI Exclusive interview, Tito Ortiz explains why he disagrees completely with Arnold Schwarzenegger’s statements on being a vegan athlete.

After Arnold Schwarzenegger appeared in The Game Changers, many fans called him a hypocrite. It was clear that during his time as an active bodybuilder that he indulged in meat quite often. Footage from Pumping Iron even documents that fact. Of course, people change. If Arnold wants to change his diet that’s his choice. But what seemed to rub people the wrong way was his endorsement of veganism for bodybuilders and other athletes.

That’s why when we sat down with MMA fighter Tito Ortiz, we wanted to ask his thoughts on Arnold Schwarzenegger’s statements in the film. While Ortiz had yet to see the film, he was quick to disagree with the idea of athletes eating vegan.

Tito Ortiz thinks we are born carnivores. That meat is necessary for us to gain the nutrients and essential minerals that our body needs to function. He believes that for an athlete to stop eating meat would be a poor career decision. While he understands that some people may be making the choice ethically to protect the lives of animals – he also sees a biological need for humans to eat meat.

That fact is up for debate as science continues to evolve and we as human beings continue to evolve as well. But it should also be acknowledged that there is a world of difference between the diet of an average person and a pro athlete. Perhaps an average human being can live a long healthy live as a vegan (though Tito Ortiz doubts this), but can a bodybuilder or a fighter succeed on the same level without consuming meat?

Tito Ortiz doesn’t think so. He also thinks that subjecting kids into a vegan diet before they are old enough to choose for themselves is wrong. At the end of the day, Ortiz looks back to our origins as people. We were hunters and gathers. Perhaps the food industry has over-processed food during our lifetime, but eating meat is core to our nature. That’s why Tito Ortiz still goes fishing regularly to this day. He catches the fish, he prepares the fish, and he eats the fish with his family. It might not be the only way he gets food – but it’s a key factor in his ideology that human beings were meant to hunt and eat meat.

You can watch Tito Ortiz’s full response in our latest GI Exclusive interview segment above.